My baby is home! 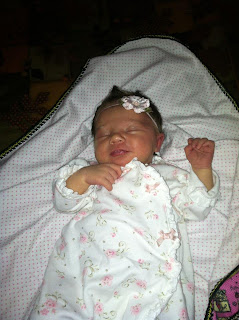 How lucky am I to get to wake up to this every morning! I could just watch her all day, I love her little noises and her little moves! She is such a good baby never cries just fusses. She melts my heart with her beady little eyes. Never really knew I could love something so much. Wes and I are truely blessed! 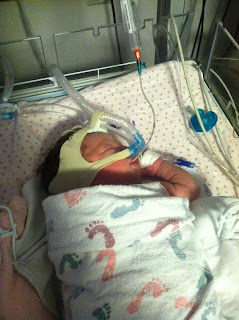 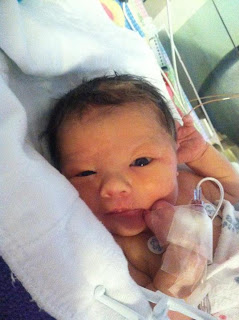 June 18th our whole world changed when this precious little girl came into our world!
Rivers Weslie Silcox was born at 11:28 p.m. 8 lbs 3oz. and 21 inches long.
Posted by Wes and Jer at 9:18 AM No comments:

Ready or not here I come

Ready our not here I come!!

October 13th Wes and I recieved one of the most shocking life changing news anyone could recieve. He had just got home from surgery on his septic knee and I was feeling a little ran down, tired and extra cranky, brushing it off thinking it had just been a long week. I didn't think much of it but couldn't shake the feeling to take a pregnancy test.I always have pregnancy tests laying around and for some odd reason I decided to take one just to clear my mind. The one and only time I was brave enough to actually look at the thing, sure as sure it was positive, before the control line even showed up to be exact. I sat in the bathroom for a while in shock and didn't quite know how to break the news to Wes as he was outside the door yelling that we needed to go get his IV antibiotics. He was a little suspicious of me going in there with something clinched in my hand anyways! I decided not to say anything, but as soon as I walked out and saw him tears instantly came. To my surprise Wes was Wes and just said "huh.. Well I knew it was coming" and continued to hobble out of the house on crutches.  I was still in shock and tried to gather composure ( I have no idea why I was so upset) as we were driving down to Nephi, the car ride was silent. After a couple more tests and a few mornings of morning sickness's the shock wore off and excitement struck. Not sure of my dates and not even missing a period yet we decided to get blood work done. Later that night the doctor called me in shock and said I was indeed pregnant and my levels were sky high!!
"Sky high, "my heart sank as Wes and I were sitting in Red Robin. My levels were tripled what they were suppose to be so that either ment there was more than one (eeek) or a molar pregnancy which meant just the sack with no baby. Again I bawled (yes thats all I did the first little while) not really knowing which one to hope for. I wanted to be pregnant but not with 15 kids.. We went in for an ultrasound later that day and this is what we saw!!! 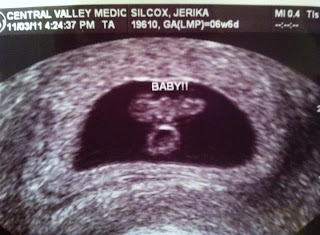 From that moment our little peanut had us wrapped around her little whatever she had at that moment!
I'm sure all of you mom's know exactly what I mean when you see your baby for the first time but it is seriously unreal. To see this little thing with a tiny heart beating is just undescribable.
Wes didn't want to tell anyone until Christmas and me not being able to keep a secret and being sick everyday all day we agreed on Thanksgiving. Well we ended up breaking the news Nov 20th. Our families were estatic and many tears and smiled were shared!
December our little peanut made her first trip to the NFR and was not a happy camper, the smoke the smells and all the above made me a hermit in our room and Wes a runner to Mcdonalds at all hours on the early morning.  We all survived and Wes had a good finals and some awesome rides despite all his injuries. January the morning sickness finally started to wear off and January 3rd we seen this!! 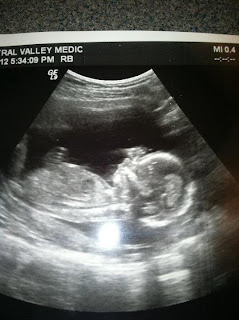 We found out our little monster who I was so sure was a he was actually a SHE!!!
Wes knew it the whole time and I was so sure it was a boy!! Daddy's always right... Well this time anyways!
A couple nights before we found out he was relaxing in the tub and I was laying on the couch he walked in and said "It's a girl I know it,"
Working in Radiology we were able to sneak a peek. Our little inmodest peanut was showing all she had and sure enough "he was a she"!!! You couldn't knock the smile off of her daddy's face! 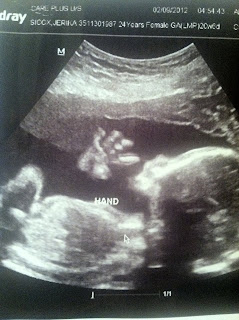 Feb 9th we had another chance to take a peek of our little bundle of joy for her 20 week ultrasound. She was 15 oz and quite the little fighter. She was not happy about the prob poking at her but before the exam was finished she waved hello to her mommy and daddy!!
So in love!! 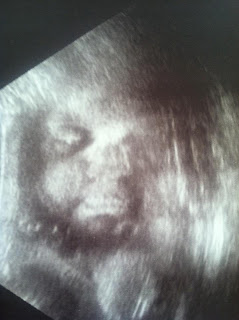 This is our baby girl at 32 weeks!! I couldn't stand it any more and snuck in for one last peek at my baby girl before she was born! All in all it was the longest 9 month with all the morning sickness's, rashes, hernia, stretchmarks (lots of tears shed over those bad boys), heart burn, and just flat out being huge I was so ready for this little girl to be born.  For 4 weeks I was at 90% and a puny 1 cm. My nose, face, lips and all the above were stretched to their max and I was a beaut.  My feet and legs were at stage 3 for adema and you could literally press on them and they would indent for a good five mins. Wes was getting into his busiest time of the year and with the doc saying she could arrive any day the last couple weeks were a little stressful. Rivers was due on Jun 17th , which happend to be Fathers Day, perfect right?? Well not for this little one, she decided she liked the 18th better, and well Wes and I did too! :)
Posted by Wes and Jer at 9:31 AM No comments:

Sticks and stone may break my bones...... 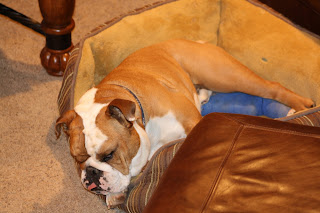 Poor Bruce had a little accident and were still not sure how he it happened but he broke his leg
pretty darn good. After 4 hours of surgery a night all by himself in a strange office.. 5 pills three times a day, no weight on his leg and being carried up and down the stairs every time he goes potty and learning to pee like a girl its been a long 4 weeks for the little guy.. Needless to say things have got much much easier and he's finally on the mend!!! Here's some picture of our poor baby!!!

Last week I made my first little trip to Texas, the 2011 season has officially started and Texas is where its all taking place... Before Wes left in January he bought me plane tickets to fly out and visit him on valentines weekend!!! It was one of best weekends I've had in a long time. I flew into El Paso where he rode in the CBR that night, A little FYI Mexican's right by the boarder LOVE LOVE LOVE rodeos I am certain with their full little hearts... It was one of the funniest/craziest bullriding i've ever been too and that's all I will say about that. Ohh and some of their boots were seriously freaking sweet...
After the bullriding we drove 10 hours to San Antonio. I now have a lot more sympathy for Wes, driving all hours of the night is for the birds. I really don't know how he does it...For those who haven't been there San Antonio is quite the place. The rodeo is huge and really cool. Out of all my days there Valentines day was the best. We went to the river walk early in the day and Wes scored a 76 later that night.. To top it off after the rodeo we snuck back in to watch Mr. Gary Allan himself... Yes I know!!! Gary Allan!! Valentines with two of my favoritest boys how luck can I get.. All in all the trip was awesome.. Short.. but awesome and can I just say it was the greatest feeling ever to see Wes after three weeks. The butterflies I had the whole plane ride there and the excitement when he pulling into the airport make him being gone all worth it... Here's some pictures from my little trip!! 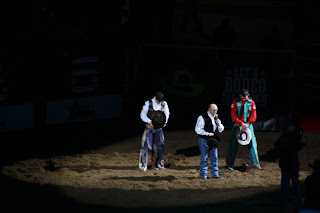 Wes was asked to be part of the opening prayer..
(this is before they started praying.. promise) 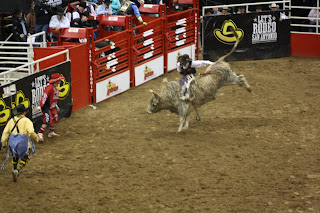 Wes doing what he does best 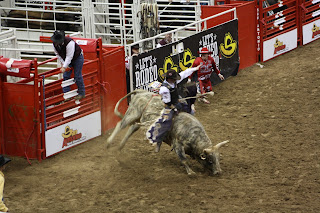 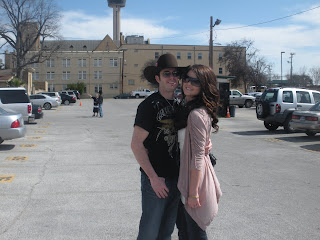 My cute hubby on Valentines 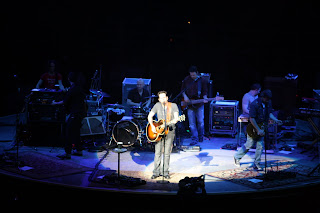 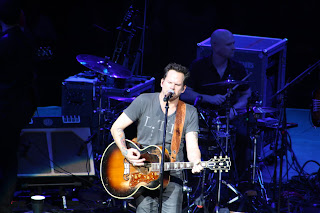 Yes I know!!!
P.s. Wes got to meet him while walking out of the locker room, but after the concert Gary waved at me in the stands!! He was looking right at me i'm sure of it...
Posted by Wes and Jer at 7:10 PM 1 comment:

Email ThisBlogThis!Share to TwitterShare to FacebookShare to Pinterest
Labels: http://3.bp.blogspot.com/-pbTG4r5NKvU/TWCqOIDc0_I/AAAAAAAAAGc/mOM86NtcFWE/s320/IMG_1176.JPG 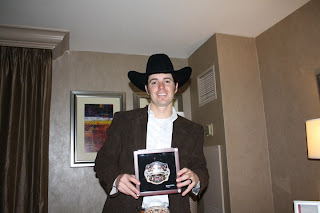 The finals have came and gone and it was an experience I will never forget. Wes had a great ending to a perfect year!! He went him first and finished second! He will never know how proud of him I am. I always knew he was quite the guy but it was awesome to see him in the eyes of the rodeo world. Plastered on walls of casinos, On every billboard his famous rides and face could be seen. I loved his cute little shy smile when fans would ask him for a autograph (which MANY did) Wes placed 5 out of 10 rounds winning the ninth round with a 90!!

My Husband Is Truely A Star!!! 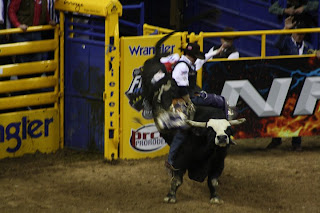 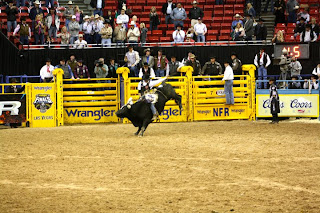 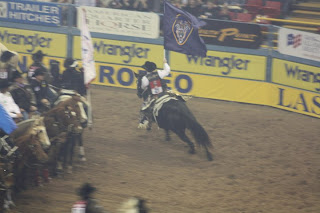 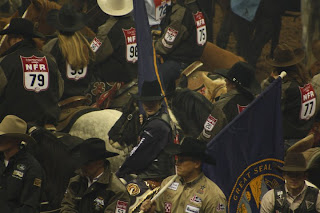 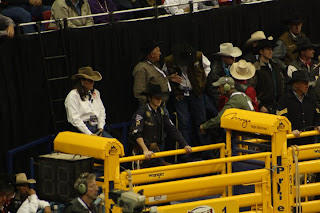 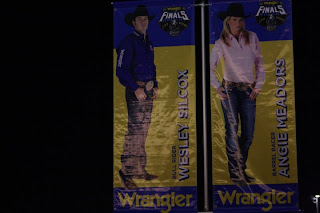 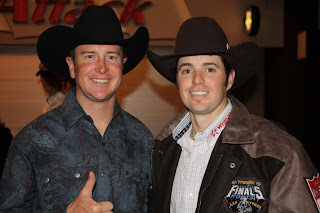 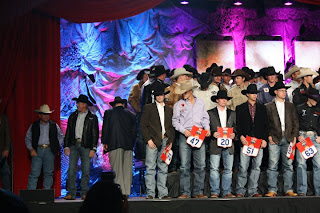 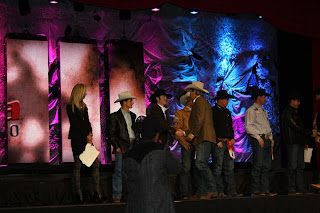 Won Cheyenne only bullrider to ride all 3 bulls, his last bull which had never been riden he scored a 94 on tieing the arena record .